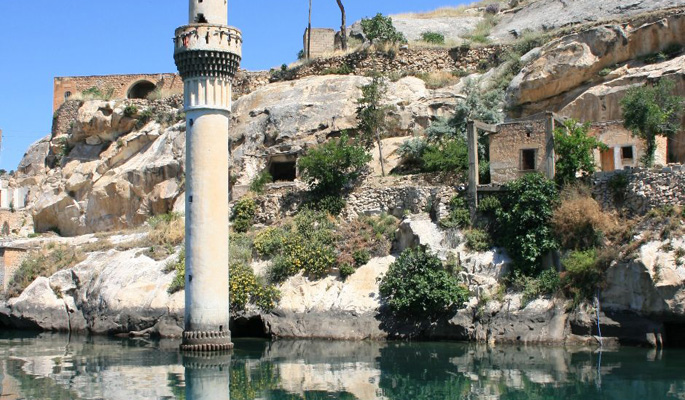 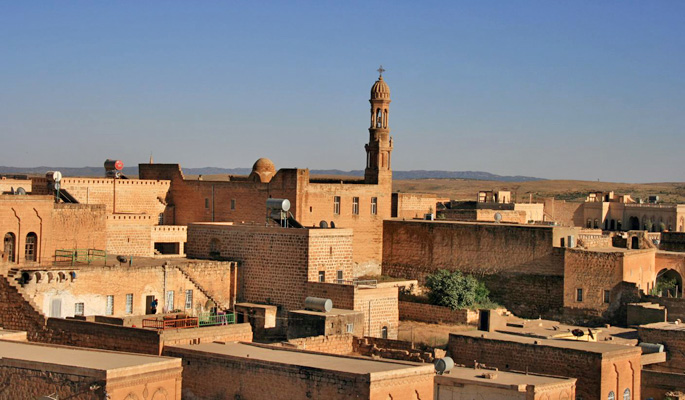 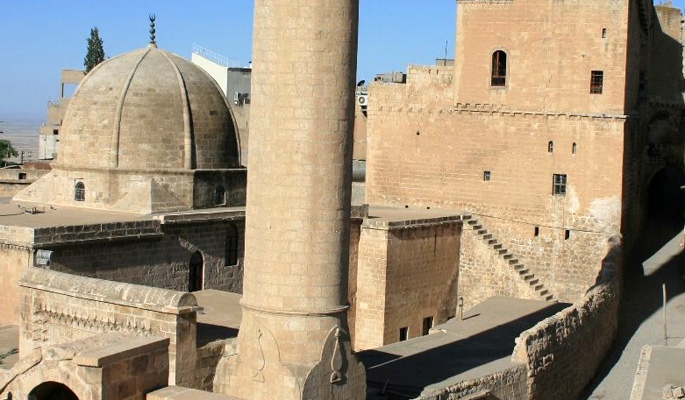 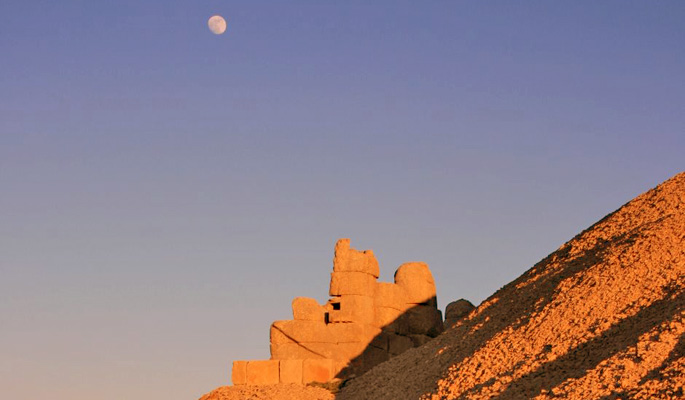 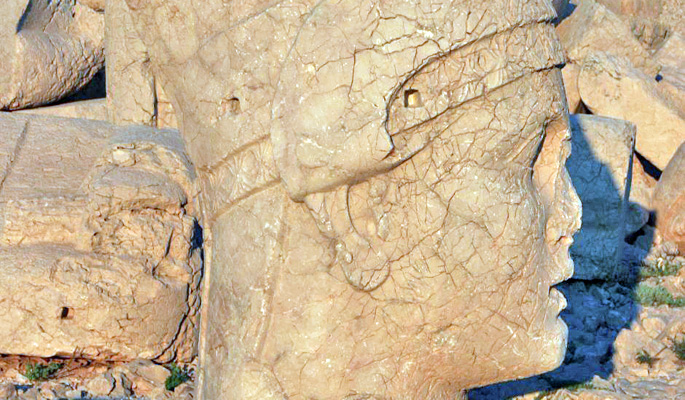 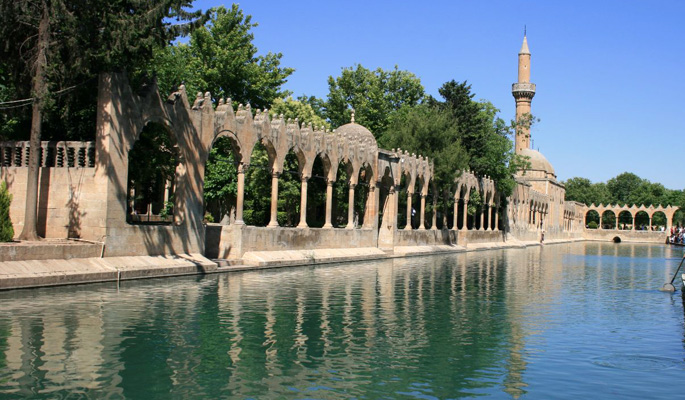 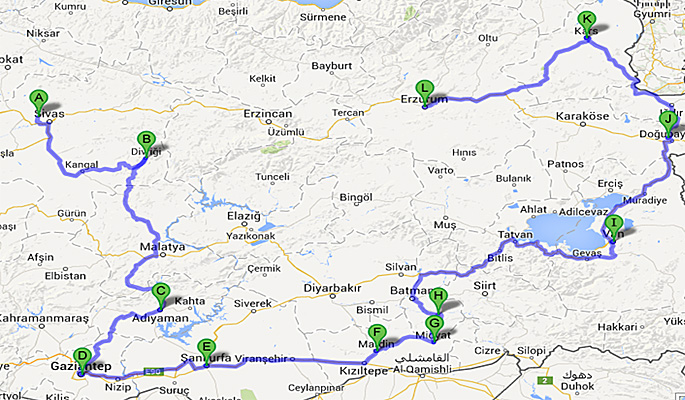 Fly from Istanbul to Sivas, which has been settled since the time of the Hittites, and was at one time the Selcuk capital. Here you can see some of the finest Selcuk buildings in Turkey with characteristically decorative facades. Sivas was also famous for its theological seats of learning, Medrese. Visit Buruciye Medrese and the stunning Cifte Minareli Medrese with twin minarets. Sifaiye Medrese built in 1217 was a hospital and medical school treating psychological disorders with hypnosis and music therapy, and these days there is a bazaar and tea garden inside its walls.

Drive onto Kangal where, traditionally, the huge sheep dogs with the same name were bred. The town is also known for its spas where fish nibble at your feet to relieve skin complaints. In Divrigi, see the whimsical Ulu Mosque and hospital which is on the UNESCO World Heritage list. Divrigi is a sleepy town with wooden minarets and inverted keyhole windows seen nowhere else in Anatolia. The mosque has portals featuring beautiful and very untraditional details. Overnight in Divrigi.

Today drive south-east towards Adiyaman; the road for part of the journey runs parallel to the banks of the Euphrates River. Watch copper being tin plated in the copper bazaar, behind which is a kervansaray where animals are tethered. Afterwards visit the museum which displays artifacts from local Tumuli that were recovered before much of the surrounding land was submerged under dam waters. Overnight in Adiyaman.

An early start at around 03:00 am to drive to Kahta for sunrise at Nemrut Dag. The 75 km road to the mountain passes villages and ancient settlements connected with the Commagene Kingdom. The colossal stone sculpted heads of Nemrut Dag are perhaps the best known image of eastern Turkey. These statues of King Antiochus and his female relatives supposedly guard his tomb buried beneath tones of crushed rock.

Return to Adiyaman for breakfast and continue to Gaziantep. On the way visit Yesemek, a vast hillside used as a stone quarry and sculpture workshop by the Hittites. Pieces lie about the slopes in various stages of completion.

Gaziantep is famous for its pistachio nuts and is renowned for producing the best baklava in the world. It is a vibrant city with an old bazaar and copper market overlooked by a castle. The museum houses some truly remarkable Roman mosaics from the ancient site of Zeugma. Overnight in Gaziantep.

The road to Urfa passes through an Important Bird Area where the Bald Ibis, among other species, is being encouraged to breed. Urfa itself has been a place of pilgrimage for many religions. It has a more middle eastern atmosphere, and is reputedly the birth place of the prophet Abraham. Two ornate pools where sacred carp swim are part of this legend. Later on we visit Harran, a nearby village with beehive-like mud dwellings that is recognised as one of the oldest settlements in the world, and which was also mentioned in the bible. Gobeklitepe is the earliest cult centre in human history where T shaped monoliths with human and animal reliefs have been unearthed. Back to Urfa for a stroll around the bazaar and an overnight stay.

Drive to Mardin, an ancient terraced town of honey-coloured houses clinging to a rocky citadel. Steep and narrow alleys lead up the hill where the city is located and from where the views over the Mesopotamian plain are breathtaking. We also visit the Syriac Orthodox Deyrulzefaran Monastery built in AD 439, one of the oldest in the world. Late afternoon we continue to Midyat, a Syriac/Assyrian town whose name is first mentioned in an Assyrian inscription around BC 890. There are 9 Syrian Orthodox churches and a dwindling Orthodox population here, plus numerous monasteries on the outskirts of the town. Overnight in Midyat.

Drive to Hasankeyf, set on the banks of the Tigris, its origin going back to BC 10.000. Hasankeyf is a spectacular ruined settlement threatened by submersion by the construction of a dam across the river which will drown fertile valleys and displace thousands of farmers and villagers. Continue to Van for overnight.

Lake Van is a huge inland sea surrounded by plains and mountains extending all the way to the borders of Iran and Iraq. It is more than 6 times the size of Lake Geneva. We will spend the whole day discovering the Urartian heritage around Van including ancient Tuspa, capital of the Urartians, who were known for their engineering skills. We will visit Van Castle and the medieval Kurdish fortress of Hosap, built in 1643 on top of a rocky outcrop with stunning views. In Gevas there is a cemetery of tomb stones dating back to the 14th century. From here we take a delightful ferry-ride across the lake to Akhtamar island, the second largest of four islands. The 10th century Holy Cross Church has been recently renovated and you can see frescoes of all the best known bible stories such as Jonah and the Whale, Adam and Eve, and Daniel and the Lion. Overnight in Van.

Enjoy a famous Van breakfast at a typical local restaurant before setting off to Kars. Stop en route at Ishak Pasha Palace above the frontier town of Dogubeyazit. Its position is spectacular, on a plateau overlooking the vast plain formed by Mount Ararat. This huge complex includes a fortress, palace and mosque, and was begun in 1685. The palace combines the architectural styles of Selcuk, Ottoman, Georgian, Persian and Armenian.

Kars was originally founded by the Armenians and has a history of Selcuk, Georgian and Ottoman occupation. In 1878 it fell to the Russians and remained with them until 1920. Traces of Russian administration can be seen in the architectural style and city planning. Local specialties include honey, a goose dish and delicious local yellow cheese. Orhan Pamuk's prize winning novel Kar was based on the town. Overnight in Kars.

Today visit Ani, a medieval Armenian city and once the Armenian capital which rivaled large cities such as Istanbul and Cairo. Ani is also known as The City of 1001 Churches. The ruins, overlooking the Turkish/Armenian border, exude a powerful mystique emanating from the rich local history. Continue to Erzurum, which is Turkey’s highest and most exposed city, and on the one hand conservative yet also a base from which to start for increasingly popular skiing and rafting holidays. Take a tour around the city, and later fly back to Istanbul.