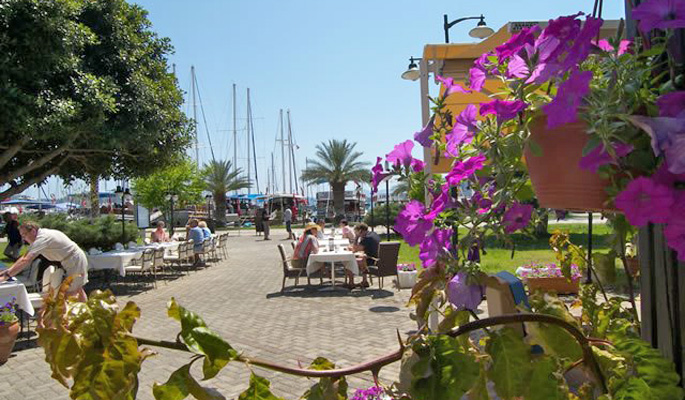 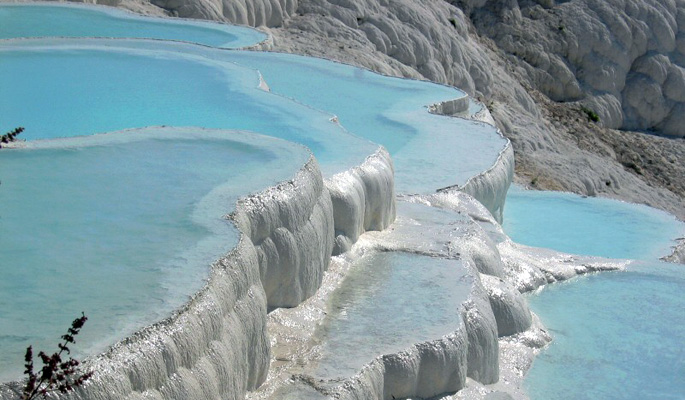 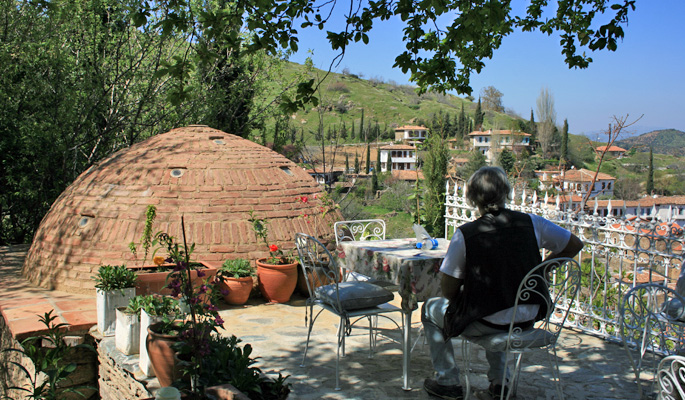 Hotel terrace in Sirince near Ephesus 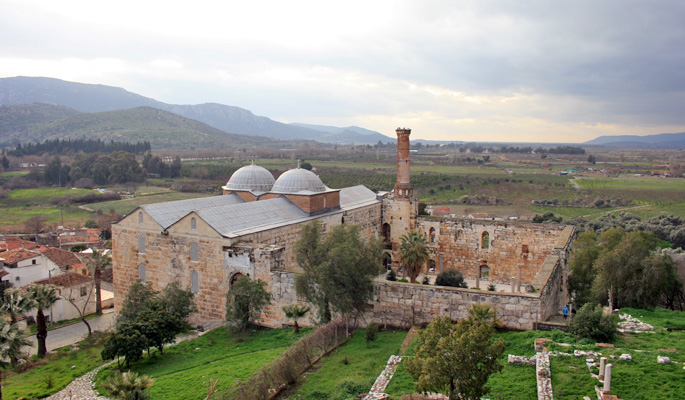 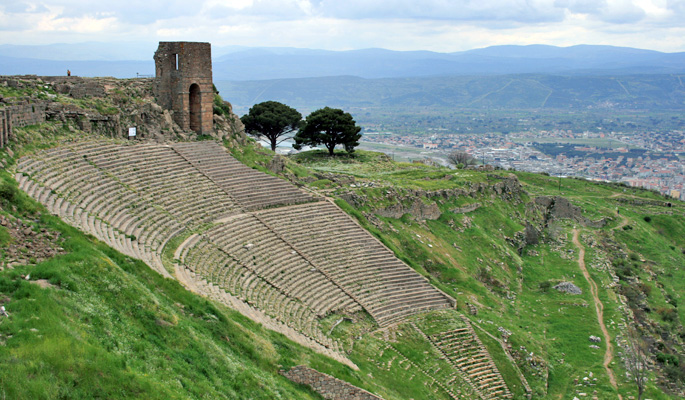 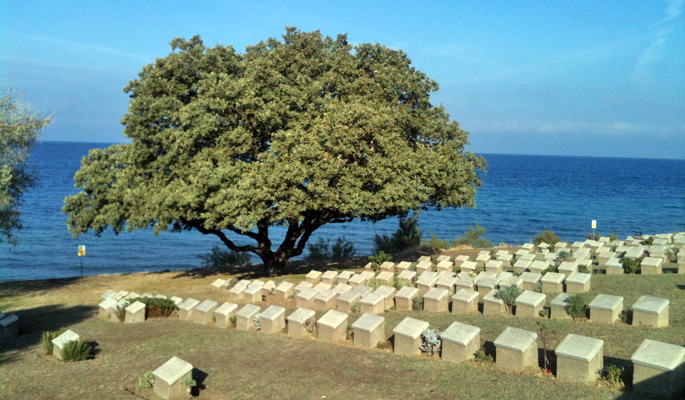 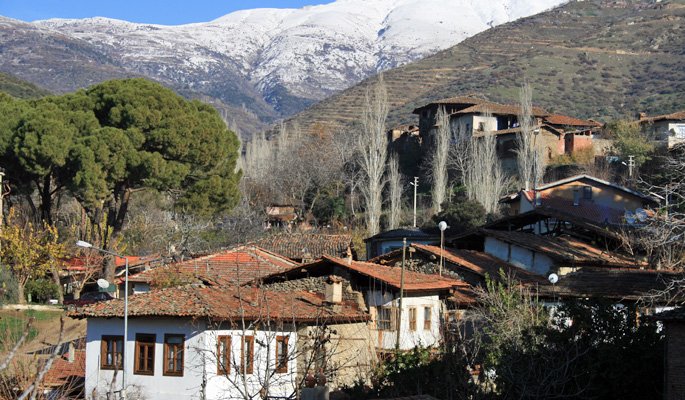 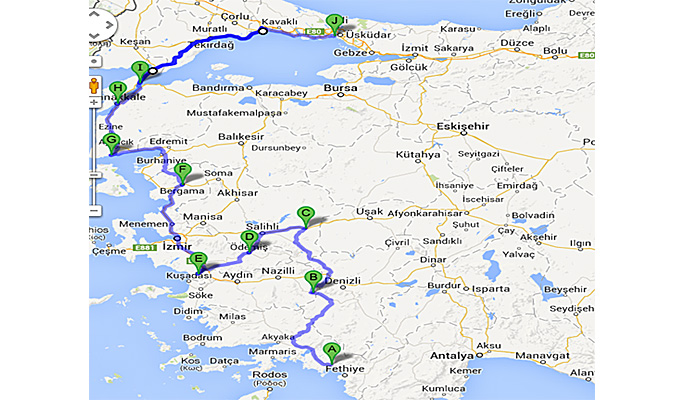 Aphrodisias, almost as spectacular as Ephesus but visited far less, is a rambling, isolated site interspersed with trees and bushes adding to the atmosphere of a city destroyed by earthquakes. The city was named after the Greek goddess Aphrodite whose temple is still visible, as is the monumental gateway and odeon. The huge stadium is both breathtaking and evocative with seats for 30,000 people and is no doubt the best preserved structure of its kind in the Mediterranean.

Pamukkale, a UNESCO World Heritage site presents a view of white calcified terraces like a frozen landscape where thermal water creates pools before cooling. Nearby is ancient Hierapolis with its Roman theatre and natural springs.

Kula is a town you won’t see in many guidebooks as you now take routes rarely seen by the average tourist. Not many people know that this area features strange volcanic rock formations similar to those in Cappadocia, as well as some lovely restored Ottoman houses, one of which is your accommodation for the night.

Birgi, at the foot of Bozdag mountain, is like the village that time forgot. Leafy with poplar and plane trees, a stream of snow melt divides it in two. You can see typical village houses with pantiled roofs, the remains of a bath house and the restored Ottoman Cakiraga mansion.

Then descend into the vast and fertile plains around Odemis. The abundance of this land can be seen at Tire’s weekly Tuesday market where vegetable and fruit stalls line the streets. The back streets offer a different craft – that of traditional felt making- where artisans still produce felt rugs, slippers and saddle blankets.

Carry on to the formerly Greek village of Sirince which is set amongst vineyards and peach orchards. Most of the houses date from the 19th Century and are almost wholly intact. The streets are cobbled and the villagers still follow a traditional way of life tending goats and sheep and making wine. Overnight in a cottage, restored house or small hotel.

The whole day is spent discovering the site of Ephesus, once the greatest city in antiquity and foremost province of the Roman Empire in Asia Minor. See the library of Celsus, amphitheatre and bath of Scholastica. Also visit remains of the noble villas, also called Terrace Houses, the Basilica of St. John and finally the House of the Virgin Mary, where she is believed to have spent her last years. Overnight in Sirince.

Drive to Bergama to visit the site of ancient Pergamon and take a cable car up to the imposing Acropolis and steep amphitheatre. See the Red Church and the Asclepion, the famous healing-centre of the ancient world. Overnight Camlibel village at a small hotel with a lush vegetable garden.

Stroll around the ancient harbour of Assos and the Temple of Apollo from where you can see the neighbouring Greek Island of Lesbos. On to the legendary city of Troy, a Bronze Age settlement dating back to 3000 BC, with multi-layers from different ages. Later cross the Dardanelles by ferry to the Gallipoli Peninsula. Overnight in the Gallipoli Peninsula.

Cross over the Dardanelles by ferry for touring the Gallipoli Peninsula. Sights include Brighton beach, the intended landing place; Anzac Cove, the landing place of the first wave of Australian and New Zealand troops; Lone Pine, the Australian memorial; Johnston’s Jolly with Allied and Turkish trenches and tunnels; Chunuk Bair, the New Zealand memorial. Visit Kapatepe Museum with relics from the Gallipoli campaign such as the diaries and letters of soldiers. Overnight in Gallipoli.